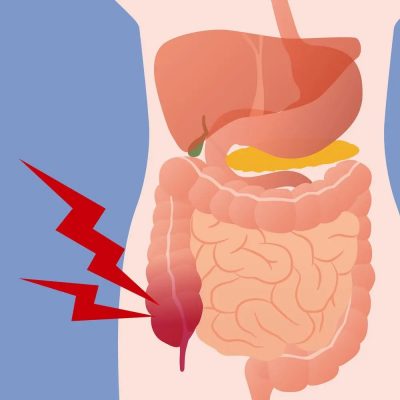 The appendix is a small sac that hangs from the large intestine. If the appendix becomes blocked or swollen, the possibility of bacterial growth in it increases, which in turn causes appendicitis. Appendicitis is an inflammation of the appendix.

Appendicitis is more likely to occur in people aged 10 to 30 years. But it can occur at any age. Symptoms of appendicitis include abdominal pain that usually starts in the area around the navel and spreads to the lower right abdomen, loss of appetite, low-grade fever, nausea and in some cases vomiting, as well as diarrhea or constipation.

Appendectomy is performed under general anesthesia, in which case “laparoscopic surgery” or “open” surgery can be used.

This surgery is prescribed for the patient in the following conditions:

When the appendix is torn and has formed a mass, which is called an appendix mass.

When the surgeon does not have enough experience to use a laparoscope to remove the appendix.

When the person has previously used open surgery on the abdomen.

In these cases, surgery involves making a larger incision in the lower right side of the patient’s abdomen to remove the appendix.

In laparoscopic appendectomy, the surgeon examines the appendix through several small incisions made in the abdomen. A small, narrow tube called a cannula is then inserted into your abdominal cavity through these incisions. Canola is used to inflate your abdomen with carbon dioxide

This gas allows the surgeon to see the appendix more clearly, and the laparoscope is inserted through small incisions in the abdomen. When the doctor finds the appendix in the picture, he sutures the end and removes it.

But the duration of surgery was not significantly different between the two groups.