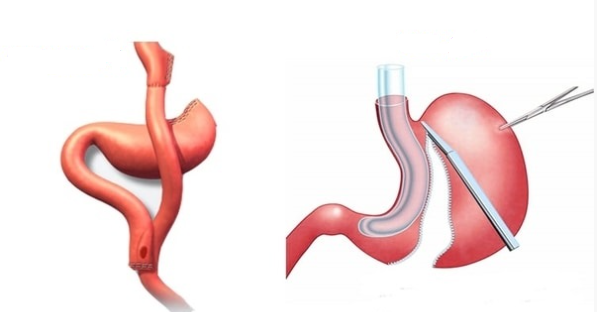 The difference between gastric sleeve surgery and gastric bypass:

In order to be able to choose between these two surgeries, it is necessary to know the differences between the two types of slimming surgeries and to be aware of the advantages and disadvantages of each.

As we know, both surgeries are performed laparoscopically

This operation is only performed for people who:

What is done in the gastric sleeve is that about 80 to 90% of the incised stomach comes out of the body and the stomach becomes a tube. Food also passes through a tubular stomach. As a result, the capacity of the stomach is removed from the sac.

We want to examine gastric bypass and sleeve surgery from different aspects:

The rate of invasion

By comparison (between a sleeve and a bypass), gastric sleeve surgery is less invasive because only part of the stomach is removed and other tissues, such as the intestine, are not involved.

Gastric bypass surgery is a two-step procedure. In this operation, the stomach is divided into two parts, the intestine is cut in the initial part and several new connections are made, which increases the operation time and its complexity.

Also, the length of hospital stay, rest and recovery at home is shorter in sleeve surgery

After gastric sleeve surgery, hunger is significantly reduced. because the lower and larger part of the stomach, which is actually the site of the production of hunger hormones (ghrelin), is completely removed. So much so that some patients some patients had to remind themselves to eat something. Weight loss after gastric bypass is done much faster. (Almost all of the patient’s extra weight is reduced in the first year after bypass.) But in gastric sleeve, the patient loses weight less slowly.

We need to know that slow weight loss is beneficial. Because slower weight loss leads to less sagging and cracking of the skin. In fact, the process of losing weight in the patient goes normally.

Gastric sleeve surgery is irreversible because during this operation, a large percentage of the stomach volume is completely removed and removed from the body.

But bypass can be reversed and the stomach and intestines returned to normal.

The ability to absorb nutrients remains after sleeve surgery

But in gastric bypass surgery, the loss of part of the small intestine makes it difficult to absorb nutrients, and the patient must take supplements after surgery.

Due to the complexity of the bypass procedure, it will cost more than the cost of gastric sleeve.

In general, gastric sleeve has several advantages over gastric bypass.

Disadvantages of this procedure include the fact that fewer studies have been performed on the outcome of gastric sleeve, but gastric bypass surgery has long been recognized as the standard weight loss solution.

However, it should be noted that despite the relatively high risk of bypass compared to gastric sleeve, it causes more weight loss.

In both surgeries, there is a possibility of bleeding, infection, and blood clots or a leak in the staple line.